Your Mom better be coming to all your games or you’re in BIG trouble.
Last edited: Dec 1, 2019
Reactions: urfan1 and mojo-spider

Does this mean we landed a new OL?

UR Fan 2 said:
Does this mean we landed a new OL?
Click to expand...

UR Fan 2 said:
Does this mean we landed a new OL?
Click to expand...

The local high school football all-star game, the Big River Rivalry, is back for its seventh season Saturday, Dec. 21 at noon at Randolph-Macon College. Tickets are $10 for adults and $5 for students. Proceeds benefit the Children’s Hospital of Richmond at VCU. Here are the 2019 UR recruit participants:


He currently has offers from Western Michigan, Richmond, Howard, Georgetown, William & Mary, and Campbell. He's also been receiving a lot of interest from Fordham, Army, App State, and VT. Word is he was invited for a visit to VT in early November.
Last edited: Dec 17, 2019
Reactions: urfan1

The University of Richmond commit had no experience playing the quarterback position when he was inserted into the lineup as a starter last year, but throughout this year, Jasiah Williams has bolstered the Thomas Dale offense, especially late into their season.

Williams was named the Village News Offensive Player of the Year as he went aflame in Thomas Dale’s last six games of the season, putting up 23 total touchdowns in the six-game period, pushing the Knights forward to their eventual loss in the regional final to Oscar Smith.

On the season, Williams threw for 1,111 yards and 11 touchdowns, ran for 647 yards and 15 scores, and even brought down 24 receptions for 409 yards and 5 more touchdowns. He wasn’t already all over the field to begin with but defensively, he even had 57 tackles, 10 passes deflected, and an interception.

With this full season as a Knight under his belt, Williams led Thomas Dale to a 9-4 record and a postseason appearance while putting up big stats, yet it’s not just his football skill that Dale coaches appreciated about him.

“He’s a kid first to class and practice and the last to leave,” said Tucker. “If he’s missing any of our practices, it’s because he’s making up a quiz or a test. He holds himself to a high standard.”

Greater Atlanta Christian quarterback Jackson Hardy and offensive lineman Myles Hinton earned two of the top awards on the All-Region 7-AAA Football Team, released Monday after voting from the region’s coaches.Hardy was named the region’s Offensive MVP, and Hinton was selected as Lineman of the Year.

32counter said:
Greater Atlanta Christian quarterback Jackson Hardy and offensive lineman Myles Hinton earned two of the top awards on the All-Region 7-AAA Football Team, released Monday after voting from the region’s coaches.Hardy was named the region’s Offensive MVP, and Hinton was selected as Lineman of the Year.

Looks like GAC lost in the semifinals to the eventual state champ.

Jackson Hardy,QB named to Georgia All State 3-A team

“Greater Atlanta Christian quarterback Jackson Hardy earns the pro-style spot on the All-State team. There were several candidates close in contention, but the senior’s play down the stretch solidified his position on this 3-A squad. During the playoffs, Hardy averaged 216.5 yards per game with a 104 QBR, leading his team to the semifinals where they ultimately loss to Cedar Grove 28-18. The Richmond signee finished off the year with a class leading 2701 yards passing and his 117.7 QBR was the highest of any QB with over 200 attempts.”
Reactions: urfan1 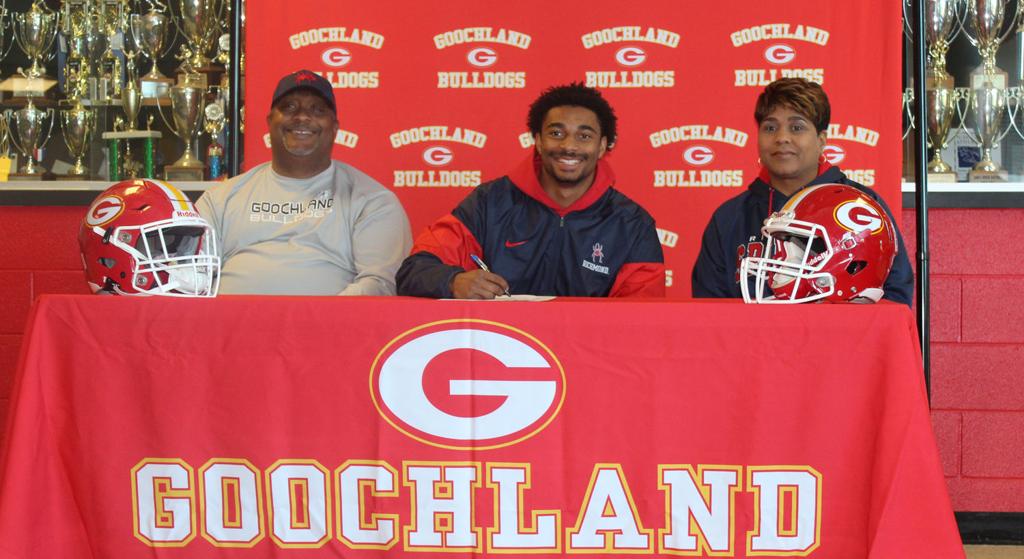 He’s learned about leadership, hard work and being a well-rounded teammate from both the upperclassmen ahead of him and the underclassmen coming up.

He’s learned life lessons – including how to be a man – from his coaches, especially wide receivers and defensive backs coach and role model Justin Fitzgerald. Both Fitzgerald and McCray’s dad impressed on him the importance of getting himself mentally prepared.

With the lessons he’s learned and the hard work he’s put in over the years, McCray is taking the next step in his playing career. This past Wednesday, he officially penned his decision to attend and play Division I FCS football for the University of Richmond.

“It’s just a big accomplishment and this is a big deal for my family and I,” McCray said. “My family’s very proud of me and they’re always by side and they’ll support me. They’re my biggest fans.”

He’s also had the Goochland family behind him throughout his life.

“The Goochland community – they’re big supporters,” he said, noting how they’ve re-posted highlights and updates on Reid Chenault playing at Richmond. “They would just show love to him, so I know they will always support me.” He’s already had people in the community tell him that they’ll come to his Richmond games.


McCray’s been playing football since he was 5 years old. Throughout all of that time, he’s been teammates – and neighbors – with fellow senior Kindrick Braxton, his best friend. They would go outside and throw the football, work on things they needed to fix and study the game together.

“We both started at the same time…we were always on the same team, grew up putting in the hard work together,” McCray said. “We’d just strive to be better than each other. We always compete against each other, and I think that’s what makes us really good athletes.”

McCray, a four-year starter, helped his Bulldogs achieve an astounding 51-5 win-loss record with back-to-back region championships in 2018 and 2019, three state semifinals appearances and one state runner-up season in 2018.

He’s held many roles on the field – he started at safety as a freshman, played both offense and defense his last three years and started at quarterback as a sophomore and junior before shifting to wingback on offense his senior year.

No matter the position he played, McCray made an impact, including when he scored the game-winning touchdown that carried the Bulldogs past Buckingham 13-7 in double overtime earlier this season.

“If they can use me in multiple ways, let’s do it.”

This past season on offense, McCray rushed 46 times for 429 yards and 9 touchdowns and caught 20 passes for 364 more yards and 5 more TDs.

“I felt like I contributed a good amount, but also it opened up other opportunities for my other teammates, like Kameron Holman,” McCray said. “In the Hopewell game I really didn’t get that many touches, but that opened up a lot for him, and he was able to shine and was able to perform very well against Hopewell, and I’m proud of him for that, and I want him to do good next year for his senior year, pick up some offers this offseason…I feel like the underclassmen will have good opportunities now.”

In three years McCray totaled 1,276 rushing yards and 33 touchdowns on the ground. In two years plus one pass completed as a freshman, he threw for 1,587 yards and 23 TDs against 7 interceptions.

On defense this year, McCray rolled out 26 tackles (16 solo, 1 for loss), caught four interceptions, recovered a fumble, scored one defensive touchdown and earned Defensive Player of the Year in Class 3, Region B and Co-Defensive Player of the Year in the James River District. McCray in four years delivered 131 tackles (70 solo, 61 assists, 3 for loss), 15 interceptions, 3 recovered fumbles and two defensive TDs.

He’ll play at either corner or safety for the Spiders.

McCray verbally committed to the University of Richmond before the start of his senior season. He also received offers from Delaware State, Howard, Robert Morris, Georgetown and Virginia State. With Richmond, McCray felt like they really wanted him, given how they came off and how they talked to him. He added that Richmond has very nice facilities, a very nice campus and a good education – the latter of which, he noted, was his main reason for choosing the university.

“Because football isn’t my whole, entire life, I know that, if I go to Richmond, I’ll have a pretty good job coming out,” he said, noting that his career interests in addition to football include civil engineering, business and sports management. “It’ll set me up for the future.”

When he last visited, he said the team was very nice and welcoming; he praised the coaching staff, and he saw that they're very supportive of each other, they work together and they don’t turn their backs on each other.

He’s looking forward to making the most of his opportunity to compete at the NCAA Division I level.

“I just want to have the opportunity to go to an even higher level – the NFL,” he said. “I have to take advantage of the opportunities and the talents that God has given me.”

To his younger teammates, McCray offers the following:

"Don't stop working hard. Accomplish what we got so close to and get that state title."

The skinny: McCray is back on the All-Metro team after recording 16 tackles, 10 assists and four interceptions, earning Class 3, Region B defensive player of the year honors. He did a little of everything at Goochland, starting as a quarterback before transitioning to running back last year, also punting and returning kicks. In 2019, he carried 46 times for 429 yards and nine touchdowns and caught 20 passes for 364 yards and five touchdowns.

The skinny: Williams played whatever position his coaches needed, and he moved the ball forward in every opportunity. He rushed 99 times for 657 yards and 15 touchdowns, caught 24 passes for 409 yards and five touchdowns and completed 59 of 104 passes for 1,111 yards, 11 touchdowns and three interceptions. On defense, he made 57 tackles, 14 pass breakups, and he intercepted two passes. He’ll play receiver at Richmond next year.

The skinny: Singleton blocked for an offense that threw for nearly 2,100 yards and 25 touchdowns and rushed for 1,600 yards and 18 touchdowns. Named all-state in the VISAA, he has signed with Richmond.

Reactions: mojo-spider
You must log in or register to reply here.