Good to hear. I know a few people at his school, will try to keep up on him.

Awesome! Did we get a time machine?
Reactions: GKiller

ChoppinBroccoli said:
Awesome! Did we get a time machine?
Click to expand...

I wish! Just got a little nostalgic for that great Mt Vernon era I grew up watching. Your guy Hubert Davis lost his last high school game ever to the Majors and cried like a baby. Granted that was hoops - just had to get that in. Hubert was a hell of WR though too as u know.

Moderator - Would it be appropriate to Sticky Thread this thread? Similar to last year. Thanks! 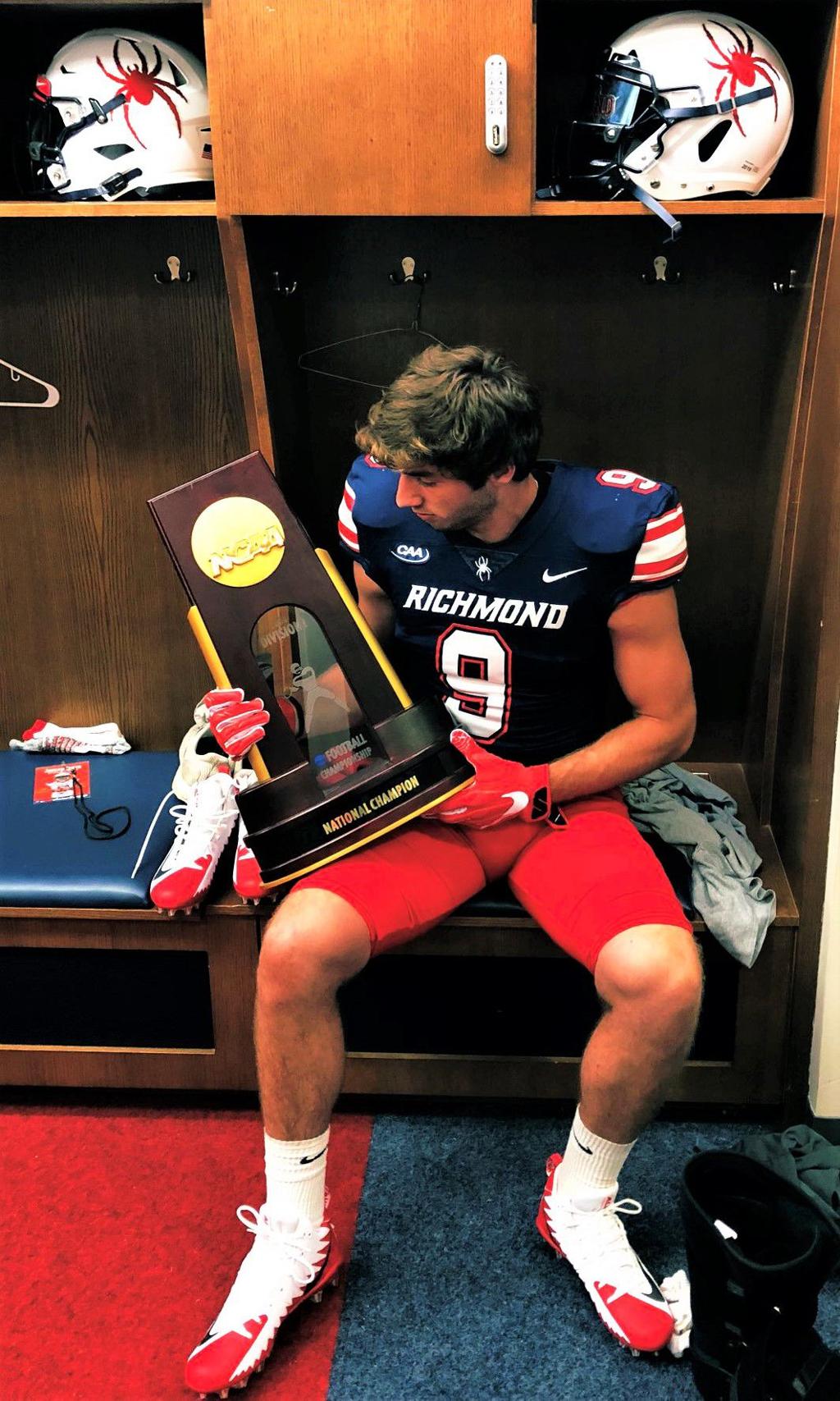 St. Paul's senior Wayne Galloway poses with the National Championship trophy during his recruiting visit to the University of Richmond. PROVIDED PHOTO▲


BY DAVID FOLSE II | Staff writer
Aug 2, 2019 - 12:32 pm
One of the best defense football players in all of St. Tammany Parish has made a very important decision about his future.

St. Paul’s defensive back Wayne Galloway verbally committed to the University of Richmond during a trip to the school’s campus in Virginia.

The 6-1, 215-pound Wolves senior is projected to play linebacker on the next level. Galloway chose the Spiders, who won an FBS (Division I-AA) National Championship in 2008, over offers from Southeastern Louisiana, Cornell, Colgate, Holy Cross and Southern Nazarene University, a Division II school in Oklahoma.

“(Verbally committing to a school) was kind of one of those things that I wanted to get out of the way before the season started,” Galloway said. “To be able to focus on helping us win games at St. Paul’s in 2019. Recruiting is such a sped-up process, guys rarely make their decision on either of the National Signing Days anymore. Richmond is signing a very specific number of linebackers for the 2020 class. I wanted to be in that number. I was blown away by the visit. It was an opportunity I couldn’t pass up.

“I had done my homework on Richmond before I made the visit up there. I knew that they were a great academic school. I saw the pics of what they can offer, and I know they are a winning program. I was expecting to be impressed on my visit, but I was more than impressed on my trip. Some of the nicest facilities I’ve ever seen.”

Hampered by a nagging injury last season, Galloway is coming off a junior campaign in which he recorded 59 tackles, a sack and a pair of interceptions in eight games.

“I get to enjoy my senior season now,” he said. “The pressure (to commit) is off, and I’ve been getting congratulations from a lot of people. I’m just ready to get going now for the prep season.”

Jeremy Singleton, a senior offensive lineman at Trinity Episcopal, has committed to the University of Richmond.

A 6-foot-4, 305-pound guard and center, Singleton joins his brother, Foster, who started three games last year for the Spiders as a freshman right tackle.

“The idea of playing next to his brother sounded great,” Trinity coach Sam Mickens said.

He reclassified after his junior year, still dealing with the effects of a broken shoulder he suffered as a freshman. The injury caused his grades to tank, Mickens said, and Singleton used the extra time to improve academically. His GPA rose from a 1.9 to a 3.5.

An LB that is also an RB: 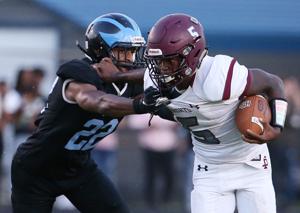 
Thomas Dale quarterback Jasiah Williams committed to the University of Richmond on Tuesday, saying he loves the idea of playing close to home where his family can attend games.

Williams (5-foot-11, 175 pounds) played wide receiver at Dinwiddie before transferring to Thomas Dale last year as a junior. He was thrust into the quarterback spot when the starter was injured, but Williams suffered an injury too, a fractured fibula in his left leg, forcing him to miss eight weeks of his junior season.

He returned before the year ended, but another injury struck again soon after. He joined the track team after the football season and began running on the first day of practice. The next morning, he awoke in pain. He soon learned he had fractured his left fibula – the non-weight bearing bone – again. Even though he had sat out eight weeks after initially breaking the bone, he wonders if he didn't give it long enough.

So for his second recovery, he sat out another eight weeks and added an extra two.

He returned to playing quarterback this year for Thomas Dale, which is 2-0 and owns the No. 3 ranking in the Times-Dispatch Top 10. Williams, who says he expects to play slot receiver at Richmond, has completed 8 of 14 passes for 172 yards and a touchdown so far this year.

Pretty sharp lid he put on there

Welcome aboard Jasiah! Love the combination of speed and power, one question, is there anything on a football field you don't do well?
Reactions: 32counter

Who is this big-time in-state player? Does anyone have any idea?

Williams, a University of Richmond signee, put forth a Herculean effort on the night by completing 12 of 23 passes for 249 yards and four touchdowns. He also ran for 90 yards and scored two rushing touchdowns, and with his TD on the blocked field goal, he had a hand in all seven of Thomas Dale’s touchdowns.
Reactions: urfan1