SpiderK said:
Don’t feel bad, they could have lost the whole staff and all the players to the portal and I would not have noticed.
Click to expand...

Thanks for sharing. You can move along now.
Reactions: WCUR11, plydogg, SpiderK and 1 other person

I didn’t know she had eligibility left. Solid outside shooter. I always had a soft spot for her. She kind of looks like my niece.

The Spiders have added a three-time first-team all-NEC grad transfer out of Wagner. 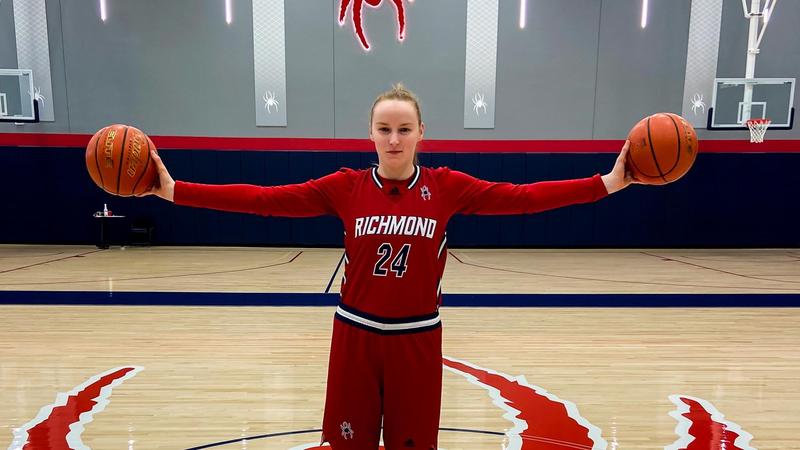 RICHMOND, Va. – The University of Richmond women's basketball program has announced the addition of graduate transfer Emilija Krista Grava, a 6-2 forward from Ligatne,

SFspidur said:
The Spiders have added a three-time first-team all-NEC grad transfer out of Wagner.

RICHMOND, Va. – The University of Richmond women's basketball program has announced the addition of graduate transfer Emilija Krista Grava, a 6-2 forward from Ligatne,

Deflategate. What's up with the basketballs in that picture.

Roche was playing with them first. 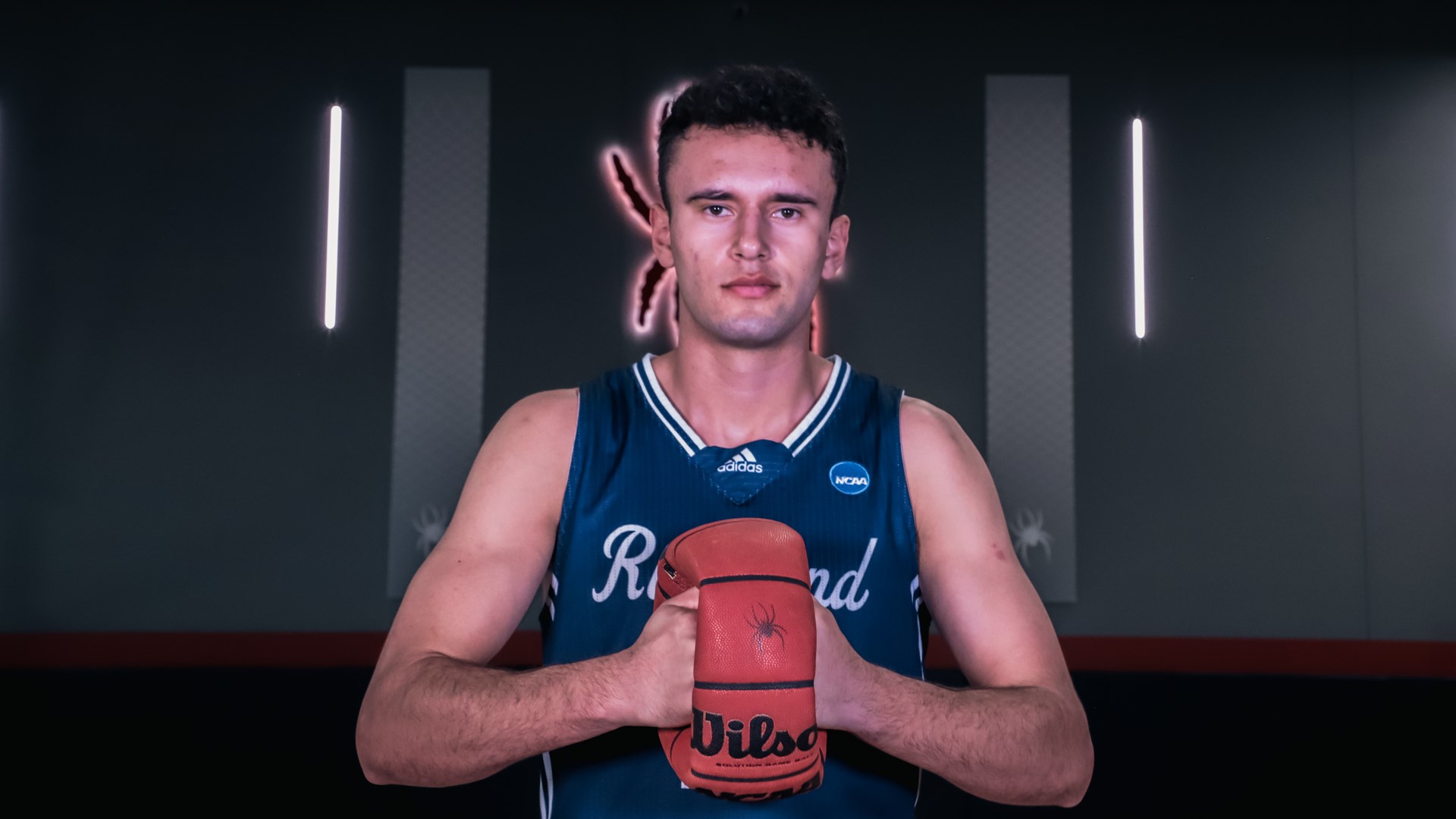 New assistant for the women...homegrown Chester/Thomas Dale product who played at Duke. 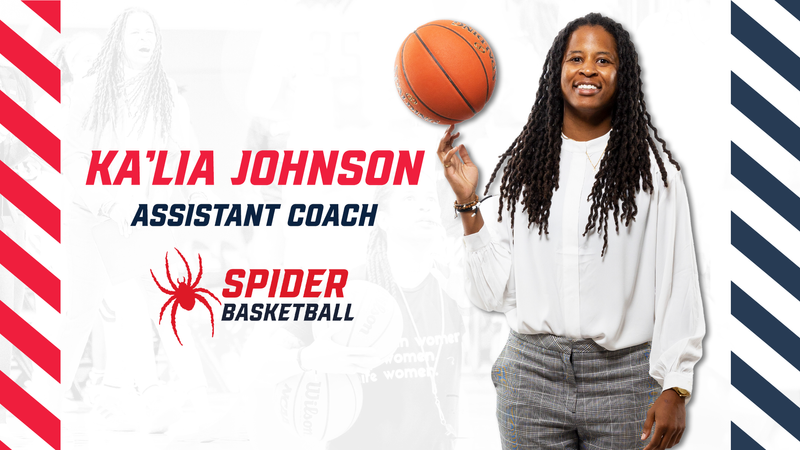 RICHMOND, Va. – University of Richmond head women's basketball coach Aaron Roussell has announced the addition of Ka'Lia Johnson to his staff as an assistant coach. 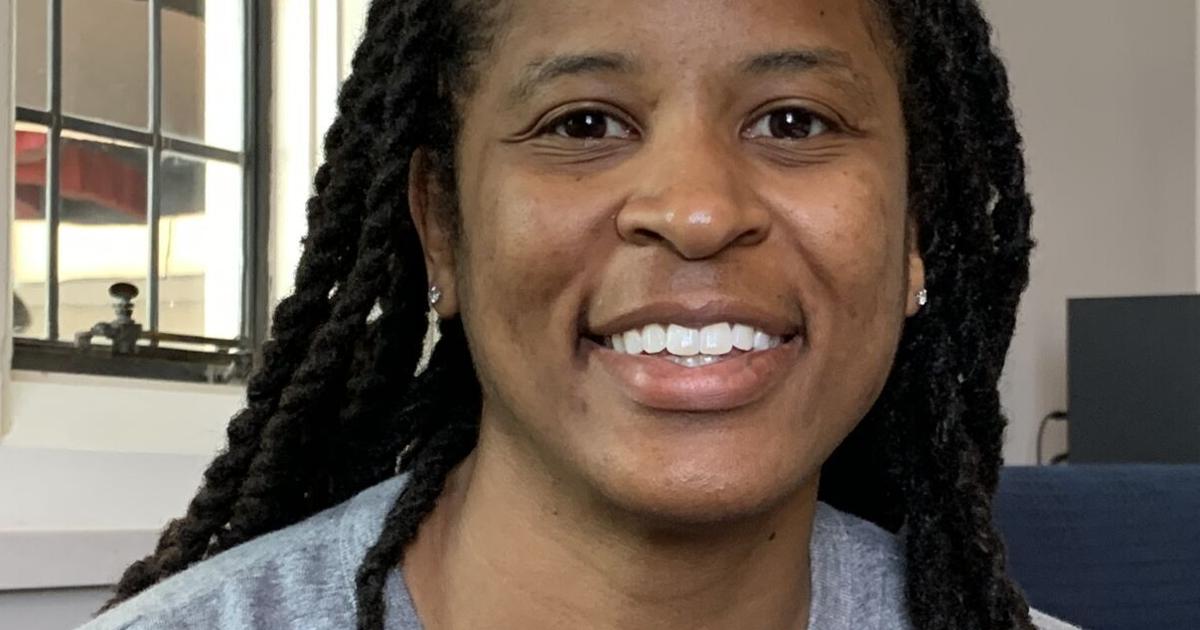 “I always tell them I’m willing to share as much as they’re willing to listen,” Ka'lia Johnson, a former Duke starter and pro player, said of the Spiders.

Roussell out there offering a 2026…wow. She picked up her first offer from Dayton yesterday.

SFspidur said:
Roche was playing with them first.

Women open the season with a 21-point win at Liberty. Budnik with 21 and Townsend scores 14 with a team-high 8 boards.
Reactions: urfan1, plydogg and Long Island Spiders

SFspidur said:
Roussell out there offering a 2026…wow. She picked up her first offer from Dayton yesterday.

I think I saw this woman at the football game on Saturday.
S

This isn’t out of the norm, Roussell offered Sanai Green last year, as an 8th grader (class of 26), from Steward School.

I was sitting next to him, while watching her play the semi-finals of their VISAA game last year against Covenant at Benedictine.
Reactions: urfan1
S

Sanai is considered at top 10 player in the class of 2026. Richmond was the first of many to offer.

Roussell got his three signees today: 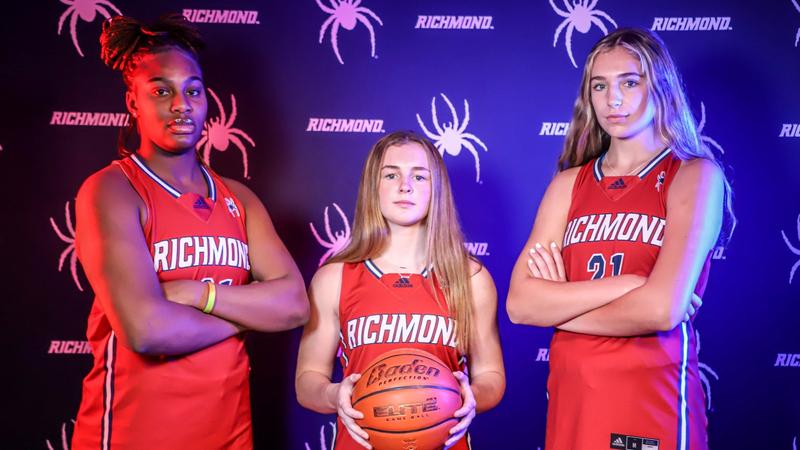 It was spooky that the both the women and men won their season openers on the same day with the same scoreline...
Reactions: plydogg

Well there should have been another "mirror" opportunity....
Reactions: urfan1

They'll be at Clemson on Sunday...the Tigers have really struggled in the ACC the past few years, but I have no idea what kind of shot the Spiders will have against them. 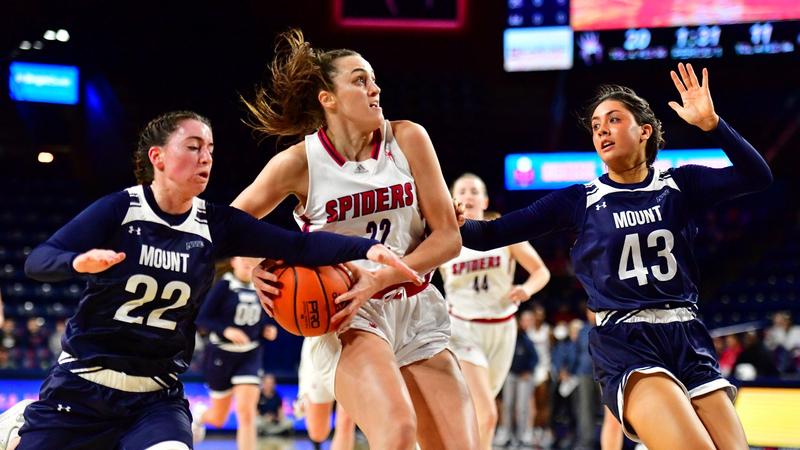 RICHMOND, Va. – The University of Richmond women's basketball team shrugged off a slow start Thursday to take a commanding lead and never relinquished the upper

I got a call from a women's player yesterday (I forgot who it was) thanking me for my donation to the program. We had a nice, albeit brief, chat. She said they were very disappointed with their performance at Clemson and they were ready to put it behind them and move forward.

One of her teammates (Siobhan Ryan) is also from the Buffalo area. She has a younger brother (Declan) who was the WNY Player of the Year in 2022, he is now attending a prep school someplace in New England. He's someone we need to keep an eye on, and I asked the player to tell Siobhan to say good things about UR to him.

Nice to get a call and nice to learn my donation is appreciated. I also donate to baseball and to their credit their outreach has improved greatly the last couple years.
S

Very early for this, considering she is only class of 2026, but I was told recently at a local HS game by someone who would know, that Sanai Green (previously mentioned) is a quiet commit to Richmond.

She is only a FR, so there is a long, long way to go. She is considered by many to be the #1 or #2 in VA and a top 25 overall recruit in the class of 2026. She was Steward’s best player last year as an 8th grader. She would be a huge pick up for coach Roussell.

UR was the first to offer her in 7/8th grade. She has since been offered by too schools many to count/list (VT, UVA, Ohio St, Kentucky, etc). But it sounds like she wants to stay somewhat local. UR is also recruiting her teammate Ella Grace Saunders (also class of 2026).

I know her coach, Kara, at Steward from various local girls basketball circles. She was a Grad Assistant at Richmond, under Michael Shafer, while she was getting her masters in sports management from VCU (part of her degree requirement). I know she thinks very highly of coach Roussell and his program, as do many of the local HS coaches.
Reactions: kneepadmckinney, urfan1 and plydogg
S

I don't normally support recruiting kids that early (8th grade/Frosh HS), but this is an approach schools have taken before and one that could potentially payoff for Rousell and his staff to make a recruiting splash, keep a local kid local, and maybe take the program to another level - ASSUMING this girl pans out to be a top 25 recruit. It has potential to have effects like Della-Donne had when playing at Delaware. They were nobody in the Womens basketball world, but when they landed the top player for a few years - they were ranked, winning games, and getting exposure.

Lets see how it pans out, but I like the idea.
Reactions: urfan1
M

Spider women won last night at W&M. They are now 6-2. Tough loss to Northern Illinois after having a big lead, but other than that, they have done well. Go Spiders!

Coach Rousell has done a great job and is great man. I spoke with him at the men's A10 tournament in DC as well as in Buffalo for our NCAA games. Love that he supports the men's team. Let's return the favor. Support the women's team this Sunday as they host Duke!
Reactions: urfan1, plydogg and Wood Hall

NIU loss was killer...Spiders gave up 10-point lead in the fourth and lost on a three with one second to go. Otherwise it would have gone to OT. NIU looks decent...not a super tough schedule but they did beat Depaul. Only loss so far is a blowout to Notre Dame.

How did we get Duke to come to the RC?
M

SFspidur said:
NIU loss was killer...Spiders gave up 10-point lead in the fourth and lost on a three with one second to go. Otherwise it would have gone to OT. NIU looks decent...not a super tough schedule but they did beat Depaul. Only loss so far is a blowout to Notre Dame.

How did we get Duke to come to the RC?
Click to expand...

Lost to Clemson, not Notre Dame. Didn't play DePaul. We won many games convincingly that we should win, though. Blew out Idaho, who had much closer games to ranked opponents.

I was talking about NIU's schedule.
M

SFspidur said:
I was talking about NIU's schedule.
Click to expand...

Yeah, I was just trying to assess NIU's quality by typing it out...lol. Good record obviously, but just pointing out that opponent quality hasn't been great. Their one loss was a blowout, but Notre Dame is very good, so still feel like it's hard to get a reading on them.

Idaho also tough to read given they haven't played many games. But yes, encouraging to see the way we handled them compared to their losses to Cal and Utah.

As for the Spiders, the Clemson blowout loss was disappointing...had hoped they could hang a bit more. Clemson has been pretty bad by ACC standards the past few years, but maybe they're on an upswing. Of course, getting absolutely destroyed in a couple of losses doesn't look great, but South Carolina and Kansas State are very good.

Women's hoops results always feel odd with the great disparity between programs. A team like Clemson can lose by 40 or 50 to the top teams in the country but then turn around and win a game by 50. And this stuff happens routinely in women's hoops.
M

Oof. Capping off the weekend.
Reactions: SpiderK and urfan1
K

Dang. We were almost half way there.
S

The dropoff as well from top ranked women's player to mid-major level is much greater as well. That is why if your just able to get one top ranked player into your program, even at a lower level - it can be a significant game changer in the women's game.

Did we play the Duke men’s team?
Reactions: 8legs1dream

That’s a lot of points. Program record is 123 against Delaware State in 1996. 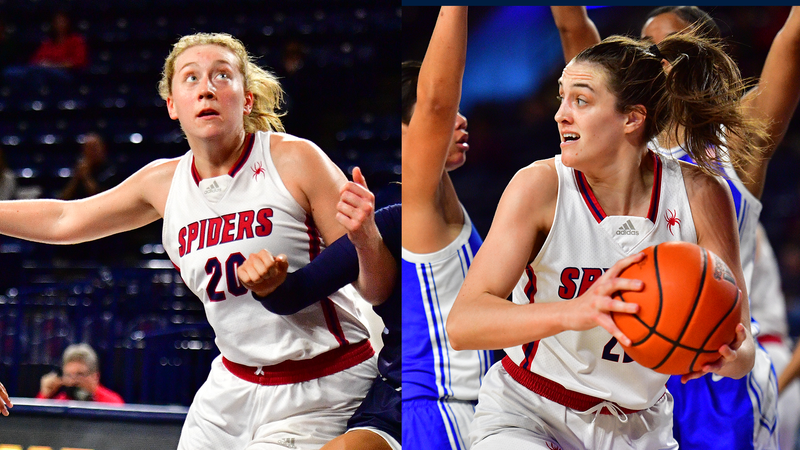 RICHMOND, Va. – Addie Budnik and Rachel Ullstrom have been named Atlantic 10 Women's Basketball Player and Rookie of the Week, respectively, the league announced

Women just beat a solid Ball State squad in the Puerto Rico opener on a Budnik triple in the waning seconds. Spiders were up 12 at the half, outscored 22–5 in the third, then bounced back in the fourth to get the win. Ryan was 7-for-9 from deep.

SFspidur said:
Women just beat a solid Ball State squad in the Puerto Rico opener on a Budnik triple in the waning seconds. Spiders were up 12 at the half, outscored 22–5 in the third, then bounced back in the fourth to get the win. Ryan was 7-for-9 from deep.

Can Ryan play MBB too? Start her with Roche.
Reactions: plydogg

Women jumped out to a 17–0 lead over Tarleton State and led 25–2 after the first quarter. The lead has been trimmed, but they're still up 32–18 at the half. Budnik already has 18.
Last edited: Dec 21, 2022
Reactions: plydogg
You must log in or register to reply here.

Team Chemistry in the era of the Transfer Portal

State of Program - 18 games into season