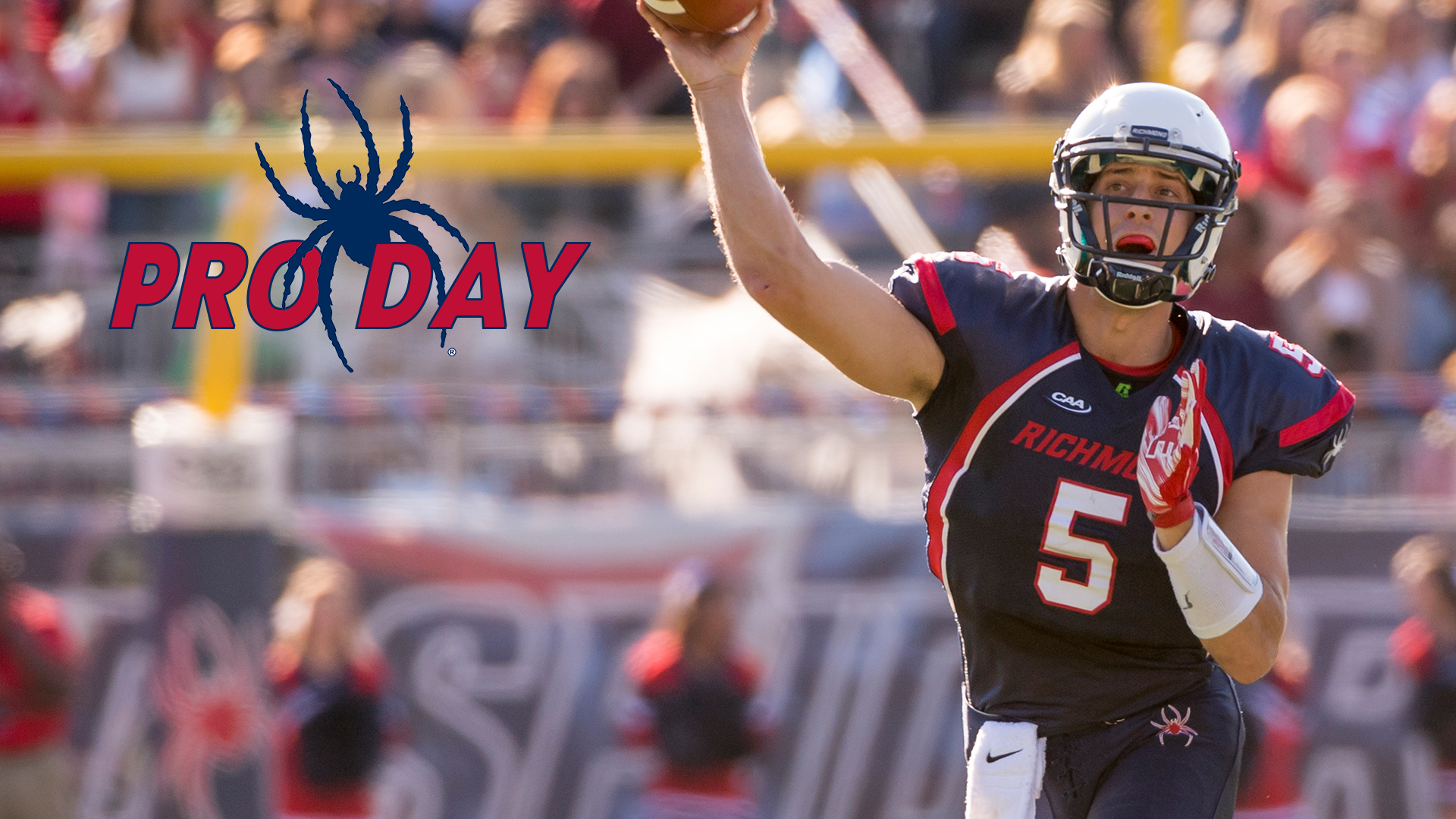 UNIVERSITY OF RICHMOND, Va. – The University of Richmond's Robins Stadium will play host to Spider football Pro Day on Tuesday (Mar. 13), where NFL draft eligible, former collegiate football players will have the opportunity to perform in front of professional scouts and coaches.

Headlining the class of Spiders working out will be QB Kyle Lauletta who has been on the national stage of late, earning MVP of the Reese's Senior Bowl prior to working out with the top prospects in the country at the NFL Scouting Combine in Indianapolis last weekend.

At the NFL Combine, Lauletta posted the sixth-best 40-yard dash among all participating quarterbacks (4.81 seconds) and the best 20-yard shuttle (4.07 seconds). At Spider football Pro Day, drills will include the 40-yard dash, broad jump, three-cone drill, and 20-yard shuttle. Lauletta will only participate in throwing drills.

Fans are welcome to attend the event for free from the West Concourse of Robins Stadium. The Robins Stadium gates will open at 8:15 a.m. on Tuesday with on-field drills set to begin at approximately 8:45 a.m. The closest available parking will be in lot B3 (or if filled, B5), directly adjacent to Robins Stadium along Boatwright drive. In the event of inclement weather, the event will be held indoors at an off-site facility and closed to the general public.

The 2018 NFL Draft will be held from April 26 to 28 at AT&T Stadium in Arlington, Texas. This will be the first draft to take place in an NFL Stadium, and the first to be held in Texas.
Reactions: mojo-spider

This is awesome. Richmond’s coverage of Lauletta throughout this process has been outstanding. Surely bringing lots of eyeballs to the website/school.

Alex and Garrett have a good shot at an FA contract.
Reactions: mojo-spider

After majoring in chemistry at UR, pro-day testing may send Tafon Mainsah to another field 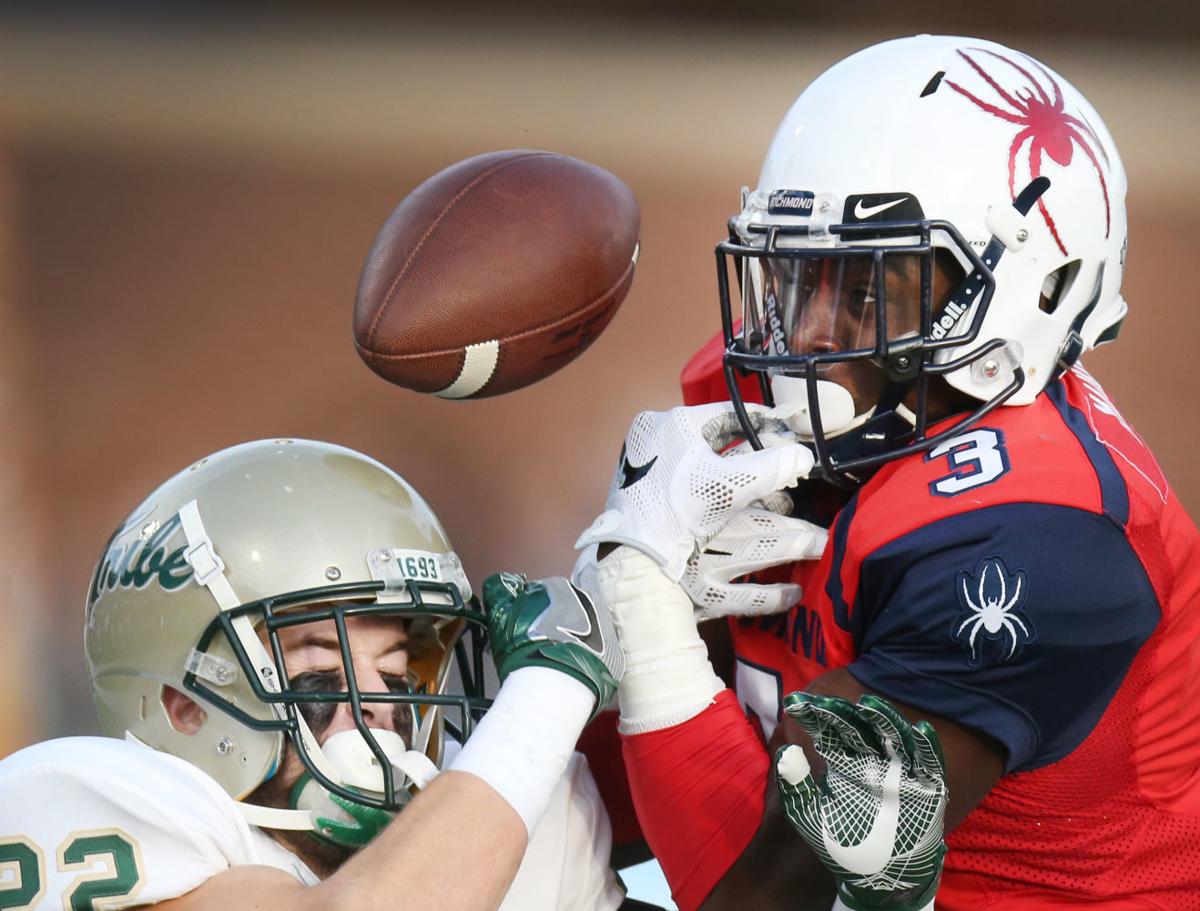 
Tafon Mainsah majored in chemistry, and minored in mathematics, at the University of Richmond. Finding a job as a forensic chemist, a path he views as intriguing, would probably not be a problem for Mainsah. He graduated in December with a 3.01 grade-point average.

First, there is some dream-chasing to be done.

Mainsah, a four-year regular as a Spiders’ cornerback and a team captain last season, will report to Robins Stadium Tuesday morning for UR’s pro day, his opportunity to earn an invitation to an NFL training camp later this year.


Most Division I programs have pro days, during which outgoing seniors with pro potential perform a combine-like battery of tests before a band of NFL scouts that travels from campus to campus.

“You’re only young once,” said Mainsah, whose first name is propounded tuh-FON. “The (non-football) job is always going to be there. There’s always going to be someone looking for a new employee. But this window of playing football, it’s only here for a little bit.

Since his senior football season ended, Mainsah has been training for this pro day. He worked out with professional supervision in Charlotte, his hometown, and at UR. Mainsah also has kept a part-time job on campus.

Included in Richmond’s group Tuesday will be quarterback Kyle Lauletta, named most outstanding player at the Senior Bowl. Lauletta, who participated in the NFL Combine, is projected as middle-round selection in April’s NFL Draft.

Other players expected to be involved in Tuesday’s pro day at UR are much longer-shots than Lauletta. Mainsah will be joined by former Spiders teammates Garrett Hudson (tight end), Lemond Johnson (defensive back), Graham Latham (long-snapper, Monacan High), and Alex Light (offensive lineman).

“We’re lucky to have Kyle. He’s going to be bringing in a lot of (scouts),” said Mainsah. “I’m hoping that I can have one guy be impressed with what I put up. That’s all I need.”

Players will run the 40-yard dash and perform the 20-yard shuttle, the broad jump, the three-cone drill and bench press, and go through other drills. Lauletta will throw to familiar receivers.

Mainsah, who observed UR's 2016 and 2017 pro days, acknowledged Monday that he is nervous, "but we've run 40s, we've done the bench-press at Richmond. This is the kind of stuff I excel at," he said. "I'm hoping that God's gifts just kick in."

Even before Mainsah goes through Tuesday drills, scouts who have done film and background homework on this 5-foot-11 197-pounder will arrive at UR impressed. NFL defensive schemes will not be too difficult for Mainsah to rapidly absorb. “Quantitative methods of chemical analysis” was one of the courses he took as part of his chemistry track at UR.

“That’s a pretty strenuous major because not only do you have the in-class work, but those labs are about three hours apiece,” said Mainsah. “And then with the (football) practice and film watching …

“I’m good with time-management. I’m not scared of hard work

Just a quick nod to our facilities management folks, who are working their asses off to plow the snow off the field and have it ready for tomorrow.
Reactions: ur2K, ChoppinBroccoli and 32counter

Tafon also deserves credit for his on camera "moves" during Spider basketball games. He was the best....and all the best to him on pro-day!
Reactions: 3genspider and urfan1

spider fan said:
Tafon also deserves credit for his on camera "moves" during Spider basketball games. He was the best....and all the best to him on pro-day!
Click to expand...

If I'm a NFL GM, I want him on my team just because he'd make the locker room
a better place. LOL 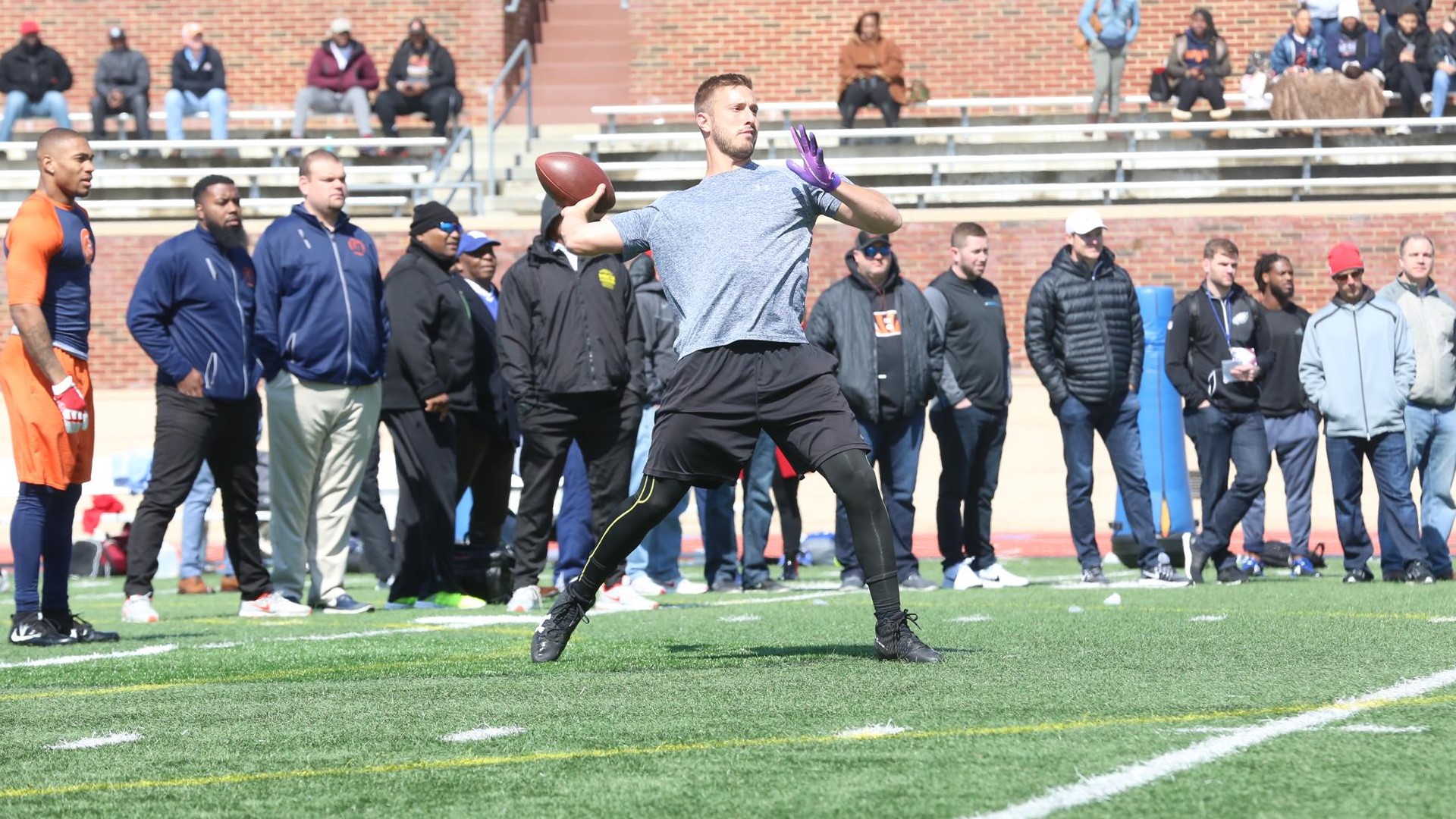 Lauletta, Teammates Impress at Spiders Pro Day
Football
Posted: 03/13/2018
UNIVERSITY OF RICHMOND, VA -- 27 of the NFL's 32 teams were in attendance as the Spiders held their annual Pro Day Tuesday at Robins Stadium.

Despite whipping winds and near-freezing temperatures, one of the biggest crowds of scouts and front-office personnel in years was on hand to see more than a dozen prospects from Richmond and other area schools perform.

The main attraction was Richmond QB Kyle Lauletta, who is expected to be the highest-drafted Spider in decades in next month's NFL Draft. Lauletta, who won MVP honors at the Senior Bowl in January and was one of the top quarterbacks in testing at last month's NFL combine, went through a script of more than 60 throws to a group of wide receivers, tight ends, and running backs.

"I think everything went smooth. It's a windy day. It's a little bit cold, so not the best of conditions. But I just came out here and had fun and threw the ball around and I thought I did an OK job," said Lauletta after the workout. "I thought everything was pretty solid. The rest is not in my hands so I'm just going to keep preparing, keep working out and doing everything I've got to do on my end and let the rest take care of itself."

With every NFL team on hand except the Broncos, Chargers, Dolphins, 49ers, and Seahawks, Lauletta took the field around 11:30 AM and spent nearly an hour going through a pre-planned program of throws as well as specific routes requested by different teams. Afterwards, he met one-on-one with representatives from several teams – including former NFL quarterback and current Cardinals QB coach Byron Leftwich – before answering questions from local and national media.

Spiders head coach Russ Huesman watched the workouts from near the end zone with former NFL running back Tim Hightower, a 2008 Richmond graduate. "[The turnout] was fantastic. Some teams brought two or three people so there was probably 35, 40 people out here, which is a tremendous turnout. [It's a] great day for Richmond football."

The NFL draft will be held from April 26-28 at AT&T Stadium in Arlington, Tex.


Tim Hightower, who played six seasons in the NFL, watched former Richmond quarterback Kyle Lauletta go through about 30 minutes of passing drills Tuesday at Robins Stadium on UR's pro day. Hightower, also a former Spider, liked how Lauletta was in command during the workout, while still calm, and praised Lauletta's accuracy on a cool, breezy day.

When Lauletta's workout closed, Hightower made a prediction regarding Lauletta's place in the late-April NFL Draft.

"Mark my words. He will not go past the third round," said Hightower, previously familiar with Lauletta from watching him play as a Spider.

Third to sixth seems the projected range in which Lauletta will be selected, but as he noted Tuesday, "you don't know, and that's the interesting thing. Even if you do have a projection, so many things can change. It depends on who other teams pick and kind of how the draft unfolds. So you never know. But that's what makes the draft such a nerve-racking and exciting time."

Thirty-two NFL scouts – that number included a few NFL assistants – were also at Robins Stadium watching Lauletta pass and other prospects go through drills. The presence of the assistants, not common for pro days at FCS schools, was a sign that Lauletta is well-regarded.

UR coach Russ Huesman said the scouts' questions he answers most have to do with Lauletta's leadership abilities, whether he could be the face of a team, and what type of person he is.

"I love the kid. He's the total package, no question about that," Huesman said.

Lauletta, 6-foot-3 and 215 pounds, increased his stock by earning the most-valuable-player award at the Senior Bowl, and followed that with a solid showing at the NFL Combine. Tuesday was his opportunity to impress scouts on his home field.

Lauletta, from Exton, Pa., and a few receivers and running backs practiced the pro-day script they executed.

"I think everything went smooth. It's a windy day. It's a little bit cold, so not the best of conditions," Lauletta said. "I thought I did an OK job."

What Lauletta did Tuesday probably looked familiar to scouts who have been watching his tape from Richmond, saw him at the Senior Bowl, and then at the NFL Combine. He has been training at IMG Academy, a facility in Florida, since the close of the Spiders' season.

"I think I just progressed and kept getting better," said Laulleta. "Like they say, you've just got to take advantage of the opportunities you get, and there's only so many of them, and you can only go through this process once."


Lauletta, a three-year starter and the leading passer in UR history, played for four offensive coordinators in four years. That scenario was not ideal as a player, but it was "a blessing in disguise," he said. Scouts view the experience with different systems as a major plus.

"I've talked to two or three (scouts) today, and they all talk about what a quick study he is," Jeff Durden, Richmond's second-year offensive coordinator, said Tuesday. In addition to his intelligence, Lauletta's passing accuracy and anticipation separate him, in Durden's estimation. There are some concerns about arm strength, but anticipation offsets that, according to Durden.

Before the draft, Lauletta will continue to work out for some NFL teams, upon request, and visit organizations at their facilities.

it looked like byran leftwich from the cardinals , and raleigh mckenzie from the raiders were at the pro day , anybody recognize anyone else? i know almost all the teams had somebody there

http://wric.com/2018/03/13/spiders-kyle-lauletta-continues-journey-to-nfl-draft/
You must log in or register to reply here.

UR Football Board Thursday at 5:25 PM
32counter