I'll take this down tomorrow but given this board gets the most traffic and know we have some old PIKEs on this board...

Found this paddle for sale. Should be owned by a UR person. I'm not in any way affiliated with the auction but thought it was a cool UR piece. 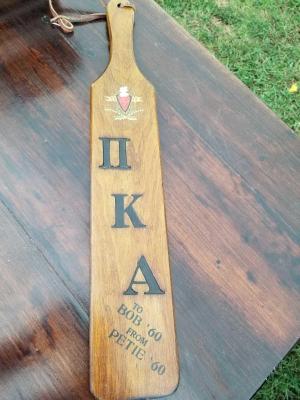 I was (am?) a UR Pike. You had to get every brother's signature on your paddle. Some gave it willingly; some just made you share a beer, or do some minor chore; others were sort of dicks and made you jump through a bunch of hoops. And a few were tough because they were brothers, but just never came around at all anymore.

I don't remember anyone being paddled, in fact at the Pike lodge there was no hazing and a pretty simple hell night, mostly a scavenger hunt that was a lot of fun. And a pledge/active football game.

Pi Kappa Alpha has a very strong 1970s-80s alumni group, and they have a great tailgate in the B3 lot before every game, right across from the stadium. They also were instrumental in getting the Omicron chapter of Pika re-instated to campus, starting next year. Not sure what lodge they will have, our old lodge (and Sigma Chi and Lambda Chi) was torn down sometime in the early 90s and the site is now a parking lot.
Reactions: plydogg

And SAE hit you with their paddle, you’d have blood blisters on your butt.
But you always said - “ Thank you sir, may I have another?”
You must log in or register to reply here.

State of Program - 18 games into season

UR Basketball Board Nov 4, 2022
SpiderTrap
S