Jeff Hanson coming back to UR

Jeff Hanson, who will turn 71 in September, just completed his 46th season in coaching. He started coaching at UR in 1974.

He earned his first national championship ring in 2008 as the Spiders' associate head coach.
Hanson graduated from UR with a bachelor’s degree in physical education in 1972 after lettering as a linebacker and helping the Spiders to a 1968 Tangerine Bowl title.
Hanson and his wife DeDe are the parents of three daughters - Laurie, Kristin and Katie.
Reactions: gcarter52, MolivaManiac, Ferrum Spider and 3 others

Thanks. I played for Coach Hanson. I wonder if he'll stay in Greenville - I hear it's a nice place to retire.

Good for him. Outstanding coaching career. Classmate of mine and a great guy. 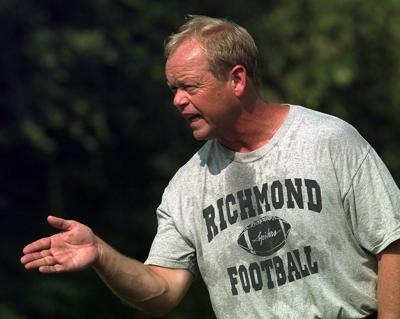 Jeff Hanson made a point in 1997 as a member of the University of Richmond staff.

1997, BOB BROWN/TIMES-DISPATCH
University of Richmond defensive lineman Kerry Wynn arrived at his first college practice in 2009 and drew the attention of Spiders defensive line coach Jeff Hanson. Wynn wore white shower shoes over his socks and carried his cleats. All other players wore cleats to the field.

As Wynn prepared to change his footwear, Hanson approached with a solemn stare.

“Kerry,” Hanson said without raising his voice, “you’re not going to the beach.”

That summed up Hanson’s approach through nearly a half-century as a college assistant coach. He recognized a policy breach and immediately offered rapid counsel, with a touch of levity. Wynn never again wore shower shoes to practice. Had he, Hanson’s frivolity would have been absent. Hanson did not tolerate repeated mistakes.

The long coaching ride of Hanson, 70, ended Wednesday, when he announced his retirement from Mike Houston’s East Carolina staff. Counting a couple of years as a graduate assistant at Richmond in the early 1970s, Hanson coached for 48 years, 26 of them at UR, his alma mater.

“This is a day I thought would never come because the game of football is everything to coach Hanson,” said former defensive end Lawrence Sidbury, who went from UR to a six-year NFL career. “He loved coaching hard, he loved the preparation, he loved the challenge.”

Hanson played linebacker during Richmond’s glory years in the late 1960s and early 1970s, then immediately joined the UR staff. He worked at all college levels, always saying what he cherished most was his relationships with players.

“To him, it didn’t matter if you were the star player or the back-up. It mattered to him what type of young man you were, if you were going to class, finishing your education,” said Sidbury. “If you went to class and worked hard, man, he loved you for it.”

Before following Houston to East Carolina, Hanson was a member of Houston’s James Madison staff from 2016 to 2018. Of Hanson, Houston said in an ECU release: “He is a great coach and communicator who positively impacted and helped develop countless of young men during his career, and he will be missed.”

“One of the best coaches I’ve had the privilege to coach with,” Richmond coach Russ Huesman, the defensive coordinator for the 2008 Spiders, said of Hanson. “Hard worker. Knows ball. He was a huge part of our success.”

“Everyone knows how much he loves the University of Richmond,” said Sidbury. “His passion for the school is unwavering.”

Great guy. Knew him well from my days working in the gym. Close friend of another former great spider Ray Tate. Coaches one year at my Alma Mater with another former Spider Phil Emiasian. Enjoy retirement Jeff!
C

Great coach and even better man. Congrats on your retirement Coach!
Reactions: urfan1

Hanson’s role at Richmond is to be determined. The Spiders, of the FCS and Colonial Athletic Association, will not play football this fall because of the pandemic and are looking into the possibility of a spring season.

Richmond coach Russ Huesman was the defensive coordinator for those 2008 Spiders. When Hanson stepped down at ECU in January, Huesman called Hanson “one of the best coaches I’ve had the privilege to coach with. Hard worker. Knows ball. He was a huge part of our success.”
Last edited: Jul 28, 2020
Reactions: DTSpider, Captain Anderson, urfan1 and 5 others

^^Best Spider Football news in a while!
Reactions: DTSpider, Stork3, Ferrum Spider and 3 others

I wish there was a love button on here. One of my all time favorites. An excellent recruiter. Just ask Tim Hightower who he signed.
Reactions: Captain Anderson and urfan1

Ferrum Spider said:
I wish there was a love button on here. One of my all time favorites. An excellent recruiter. Just ask Tim Hightower who he signed.
Click to expand...

Something is up with recruiting, it seems.We need help.No closers.

Ferrum Spider said:
I wish there was a love button on here. One of my all time favorites. An excellent recruiter. Just ask Tim Hightower who he signed.
Click to expand...

Another UR football alum testimonial :

Great to have Coach back with the program in any capacity!
Reactions: urfan1

32counter said:
Something is up with recruiting, it seems.We need help.No closers.


Hopefully,Jeff will bring his A+ recruiting game.We miss those Sparky Woods abilities.Braithwaite(UNCC)was a good recruiter as well.
Click to expand...

I think Coach Lacy is doing a good job with recruiting, and now combined with Coach Hanson things are only going to get better. We’ll have two closers.
Reactions: 32counter

Jeff will be the DE coach per Russ 8/25.
Reactions: urfan1

Is it just my imagination, or did our commits jump up after Jeff came back on staff.
Reactions: 32counter

I remember meeting Jeff his freshman year. I was friends with several of the players and I thought,
“who is this babyface kid with blonde hair?“ I even verbalized my thoughts. My friends looked at me
and just laughed. Yep, I ate a lot crow on that remark. LOL

Jeff was a fun guy, back then the football players were just like the rest of us and would hang with the regular students. I was a Fiji but loved hanging with the Theta Chi's.
Reactions: urfan1 and AnnapSpider

Here’s hoping that my UR classmate gets healthy very quickly.We need him back ASAP especially given our very inexperienced defensive line.Get well,Jeff.
Last edited: Aug 16, 2022
Reactions: KE Spider, urfan1, Spiderwiz and 1 other person
You must log in or register to reply here.

Sparky is a Star

UR Football Board Aug 5, 2018
AnnapSpider

A Loss for UR Spider Fans