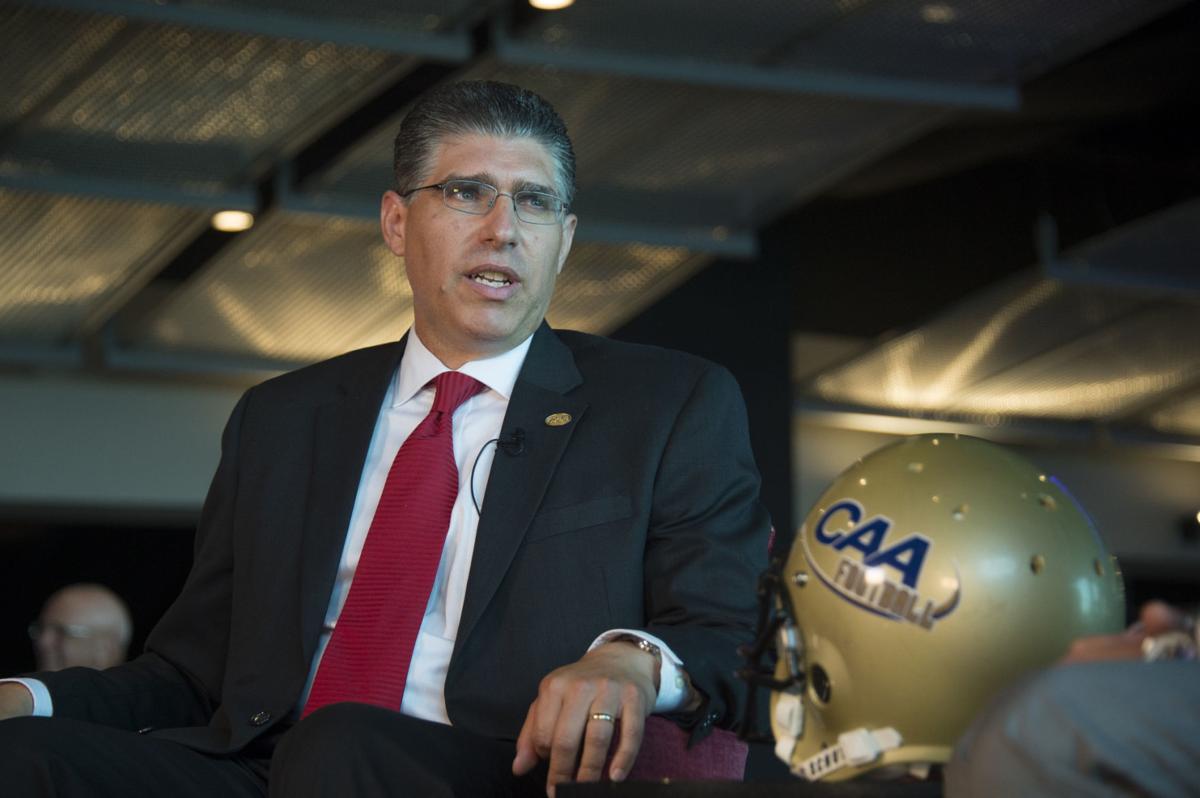 CAA Commissioner Joe D'Antonio: "We need to find a way to implement (a new transfer policy) and go forward.”


The Richmond-based Colonial Athletic Association starts its annual spring meeting May 29 in Ponte Vedra Beach, Fla., and the league’s athletic directors and coaches will discuss potential antidotes to the steady flow of Division I transfers, Commissioner Joe D’Antonio said Tuesday.

In that quest, particularly as it applies to men’s basketball transfers, the CAA has lots of company. According to an NCAA report released six months ago, about 40 percent of men’s basketball players who enter Division I out of high school transfer from their initial colleges by the end of their sophomore years. The trend isn’t as pronounced in football, but it can be problematic in that sport too, D’Antonio noted.

There are no easy answers, said D’Antonio. He added, “What I feel strongly about is we can’t continue to debate this every year. This can’t continue to go on. We need to find a way to implement (a new transfer policy) and go forward.”


The Division I Transfer Working Group, the NCAA body formed to study the topic, will seek feedback from spring conference meetings before reconvening in June to continue its mission, according to the NCAA.

Other subjects that will be covered at the CAA meetings:

“We have not had a specific opportunity to discuss this as a league yet, but it’s a national issue. There’s no question about that,” said D’Antonio. “We’ll see what plays out in several states.”

Current NCAA rules allow players five college years to participate in four seasons. Any game involvement, even one snap against outside competition, counts as a season of eligibility. There’s a proposal currently in the NCAA legislative cycle that would allow a Division I player to play up to four games in a season without that participation costing him a year of eligibility.

Nationally, coaches support the proposal, and Richmond coach Russ Huesman recognized how important its approval would be for FCS schools. They operate with a scholarship limit of 63. The FBS limit is 85.

“Come by the office and you’ll see me doing back-flips if that thing passes,” said Huesman.

In mid-April, the proposal was tabled by the Division I Council, which wanted to explore any impact the change might have on other sports. It’s still conceivable that the redshirt rule could be modified for this football season.

The ACC submitted the proposal, which states: “The current rule often places coaches in a difficult position to decide whether to play a student-athlete in a limited amount of competition or to preserve the student-athlete’s season of eligibility. The opportunity to play in a small number of games will ease this decision for coaches and help the student-athlete’s development and transition to the college game.”

A few years ago, the Big Ten made news by announcing that its members would phase out games against FCS competition. That move put all FCS programs that regularly meet FBS opposition on alert. Would the Big Ten’s stance start a national trend?

“In my mind, those concerns have lessened significantly,” said D’Antonio. “Do I think it’s a concern still? Yes.”

Big Ten schools backed away from the FCS prohibition for a couple of reasons. Non-Power Five FBS schools jacked up their guarantee fees. It was costing Big Ten schools $1 million, or more, to bring in a Mid-American Conference (FBS) opponent rather than $500,000, or less, to have an FCS team as a guest.

Secondly, there is reduced anxiety that playing a FCS team could damage the strength-of-schedule component of an FBS team’s power ranking to the degree that it would handicap the FBS team’s shot at qualifying for the College Football Playoff. Alabama and Clemson, and several other national-championship contenders, annually play FCS opponents.

This virus has really impacted sports a lot. Every sport has stopped playing around the world and it is really bad. Some of the teams will have serious financial issues and I just hope that everything comes back to normal soon. We were supposed to have Olympics this summer and now it is postponed officially which is sad. There is nothing to watch and it is really boring to stay in your house all day long with no sports. I have found one source of entertainment which is this app from a betting website. They have some free games you can play and there is still something to bet on.
Last edited: May 21, 2020
Reactions: urfan1

I hope this does not happen.....college football returns in 2021.
You must log in or register to reply here.

UR Football Board Friday at 8:48 PM
DTSpider
D

UR Football Board Dec 4, 2022
CarolinaSpider
C

The challenges which lie ahead

UR Football Board Tuesday at 9:56 PM
32counter